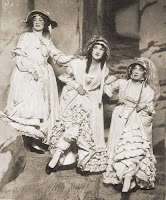 Today's typo turns up a toe-tapping 34 times in OhioLINK, which makes it a "high probability" typo on the Ballard list. The Eldest Nibling (which sounds like it might be a Gilbert and Sullivan song, but is in fact based on a submission to the "Word Fugitives" column in The Atlantic meaning "offspring of a sibling, one's niece or nephew") was recently seen playing the part of the Pirate King in the musical The Pirates of Penzance. The plot is driven by a sort of auditory typo—young Frederic is mistakenly indentured to a group of pirates, rather than pilots. Opening at the Fifth Avenue Theatre in 1879, this was the first G&S vehicle to premiere in New York City. Copyright protection did not exist at that time and the two artists were anxious to prevent the "pirating" of their opera abroad, a fate that had befallen H.M.S. Pinafore and would continue to plague future collaborations. Just like the eponymous "pirates" playing at illicit adventures on the high seas, my nibling's middle school production had a lot of flash, dash, and panache. Yo-ho-ho and a package of gum! Bravo, kids!

(Photo of Catherine Ferguson, Nellie Briercliffe, and Ella Milne in The Pirates of Penzance, 1930, from Wikimedia Commons.)

Funny the mention of ohioLink, I was thinking about Ohio today. Is it the only 4 letter 3 syllable word in use in English?

::shudder:: How is such an obvious error so common? My goodness!

No, indeed! Although it took awhile and the polling of my fellow typo bloggers to come up with this (partial?) list:

suddenly they all look so obvious