"I stood agog in Lafayette Square in Savannah, amid brick paths, trickling fountains and dark trees hung with Spanish moss. Before me rose up a cathedral of linen-fresh whiteness with twin Gothic spires, and around it stood 200-year-old houses of weathered brick, with hurricane shutters that clearly were still used. I did not know that such perfection existed in America." Bill Bryson in "The Lost Continent: Travels in Small-Town America." Savannah was presented as a Christmas present from William Tecumseh Sherman to Abraham Lincoln in 1864. When Sherman neared Savannah he was approached by civic leaders who promised to lay down all of their guns if the general would promise to not burn the place. He agreed and the city was left unmolested. Savanah is one more case of a missing letter typo. It can be found in the D or Low Probability section of Typographical Errors in Library Databases at http://faculty.quinnipiac.edu/libraries/tballard/typoscomplete.html . There are more than a million cases of Savanah in Google, so we assume that the main issue here is 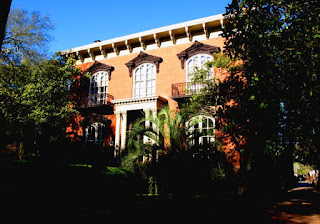 that people aren't sure how to spell the name. We made our first visit to Savannah last March - so taken by John Berhrendt's "Midnight in the Garden of Good and Evil" that we finished our visit drinking martinis on the grave of Conrad Aiken at Bonaventure Cemetery. On a related note, today's photo shows the Mercer House, which figured prominently in the book and Clint Eastwood's movie adaptation. The original can be found at
http://www.pbase.com/image/93848740
Posted by librarytypos at 5:12 AM