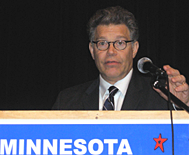 Senate contenders Al Franken and Norm Coleman have been mining for missed and miscounted votes ever since Election Day, each one hoping to ultimately tip the scales in his favor. Coleman campaign attorney Fritz Knaak has called for a "truce" between the two camps, citing an "obscene number of ballots" being challenged in "the recount version of mutually assured destruction," according to the website MinnPost.com. Minesota is the clear winner in the Minnesota typos race, with 16 hits in OhioLINK. (Minnsota, Minnnesota, and Minnestoa are trailing with one, four, and five respectively). Both candidates appear to have high self-esteem, but perhaps only Franken is smiling at himself in the mirror each morning, repeating: "I'm good enough, I'm smart enough, and doggone it, people like me!"

(Al Franken on the campaign trail, from Wikimedia Commons.)

Thanks. In our OPAC I also found:
Minnesoata