Contemporaneously (one of the et cetera above) to "penning" this typo, I'm preparing to venture eastward to lead a workshop on the whys and wherefores of Library of Congress Classification. While some have contempt for LCC, it does superbly organize material AND describe material, if one is so inclined to use it that way.

Many simply employ it as a means of shelf location. However, just as there are typos with words, there can be "typos" with classification numbers. It's very easy to transpose or omit letters and numbers. When this occurs, no one is the wiser. For those who tend to browse in the stacks, it does mean certain items will be missed. Contemporaneously, some items otherwise not found, might be. Such is serendipity.

You will find a mere 130 of this typo in OhioLink, thus placing it on the A list (those of highest probability category) in the Typographical Errors in Library Databases.

This should be familiar to a good many of us: 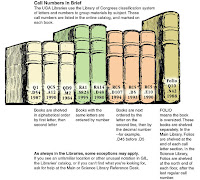 Image from Google Images
Posted by librarytypos at 5:00 AM