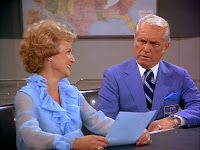 "It all started at a 5,000-watt radio station in Fresno, California," Ted Baxter of the Mary Tyler Moore Show would ponderously intone, whenever he could wangle a captive audience, which was usually at the annual "Teddy Awards." The thoroughly insufferable, but somehow still lovable, TV news announcer was played by Ted Knight, who got his start at a radio (and TV) station in Albany, New York (WROW) in 1955. Ted Baxter was the bronzed bane of his boss's existence; in real life, though, Ted Knight and Ed Asner were good friends, despite their political differences (Asner was a liberal activist and Knight was a social conservative). Ted Knight passed away in 1986. (Betty White, at 88, is still kicking, as are the rest of the MTM cast members. The iconic sitcom itself will live on in our hearts forever.) We found 15 instances of Edted, which need to be edited, in the OhioLINK database.