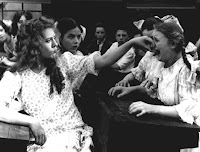 Family lore has it that my expectant father originally wanted to call me Rebecca and I sometimes wonder how my life might have turned out differently had he prevailed in that regard. I'm not really sure what his reason was, but I bet it was because of the enormously popular children's book by Kate Douglas Wiggin, Rebecca of Sunnybrook Farm. (This book also gave birth to a Broadway play and three movies.) Since I was a hayseed too and my middle name is Suzanne, I suppose I could have even ended up with the rather bucolic-sounding moniker "Becca Sue." There were eight appearances of Becasue in OhioLINK today, and 63 in WorldCat.

(Mary Pickford in the 1917 silent film Rebecca of Sunnybrook Farm, from Wikimedia Commons.)

“Occasionally” is one word I always get wrong. Well, ocassionally.

This is a great one, Becasue!