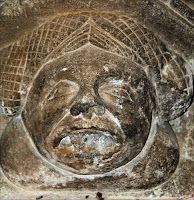 It's axiomatic (if not actually true) that women "nag" more than men do. According to one online source, the term itself "is used almost exclusively by men to describe women. Although the word nagging has its roots in the definition meaning to gnaw at, that hasn't stopped people from associating the term with female animals, as in 'hen-picked' [sic] and ... 'old nag' (horse)." We're also told that in the 16th century it was a crime for women to nag men and that "until the 20th century, women were still being publicly punished for nagging." I Googled "male nags" and "men + nagging," etc., and got some rather depressing stuff about Islamic gender relations as well as a bit of feminist debate over the difference between "nagging," "whining," "pouting," "bitching," and "lecturing." I'm certain that when I tell you there were 199 cases of today's typo in OhioLINK, I won't have to resort to nagging to get you to manage this one in your own catalog.

(A gargoyle of a nagging wife, from Grendon, Northamptonshire, church, courtesy of Wikimedia Commons.)