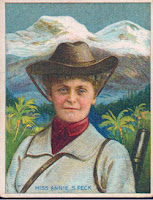 Annie Smith Peck was born on October 19, 1850, in Providence, Rhode Island, and died on July 18, 1935, in New York City. But despite starting out and ending up in relative flatlands, she spent most of her life climbing mountains. Born into a wealthy and rather forward-thinking family, Peck got off on a good foot, attending schools in Rhode Island, Michigan, Germany, and Greece. During the 1880s and early '90s, she taught archaeology and Latin at Purdue University and Smith College. As she continued traveling the globe giving lectures, she eventually found her true calling, and at the age of 35 began mountaineering in earnest, scaling Mount Shasta, the Matterhorn, and other impressive heights. She seemed to especially enjoy South America; in 1928 the northern peak of Peru's Mount Nevada Huascarán was named Cumbre Aña Peck in her honor. Today's typo is one letter shy of a mountain, with six showing up in OhioLINK and 61 in WorldCat.