Rachal + Rachel (for Rachel or Rachal) 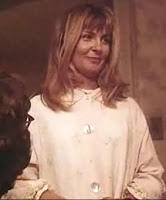 In 1968, Joanne Woodward appeared in a rather astonishing movie called Rachel, Rachel. It was produced and directed by Paul Newman, to whom she had been married for ten years. Based on the book A Jest of God by Canadian author Margaret Laurence, it tells the story of a 35-year-old school teacher living in Connecticut with her controlling and widowed mother. It features notable scenes of Rachel fantasizing in public and pleasuring in private ("just so I can sleep"); sharing a lesbian kiss with her best friend and fellow teacher (Estelle Parsons), who also happens to be a giddy Pentacostal; and losing her long-held virginity to a former high school classmate home visiting his family. Woodward is at her slightly weird, mockingly wry, somewhat spunky, buttoned-up best in this part. Oh, and did I mention that Rachel, like the graphic artist Alison Bechdel, was an undertaker's kid who grew up in a funeral home? (That role, in flashback, was played by Woodward and Newman's then nine-year-old daughter, Nell.) Check out Rachel, Rachel, showcasing the wonderful Joanne Woodward, and then check your local catalog for Rachal + Rachel, which rates as a "low probability" typo on the Ballard list. There were six of these in OhioLINK (though only four were legit), and 26 in WorldCat.

(Screenshot of Joanne Woodward from the trailer for the film Rachel, Rachel, from Wikimedia Commons.)