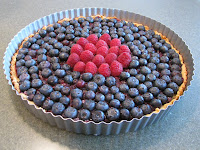 Under the new cataloging standard known as RDA, it seems we are now supposed to write out many of the words we used to abbreviate: for example, Department instead of Dept. DEP can stand for quite a number of things, one of which is "Department of Environmental Protection." And one way to protect both your internal and external environment might be to plant and eat more blueberries (high in antioxidants) or just more berries in general (they're all really good for you!) The word tart derives from tarte, torte, or torta, all having to do with baked goods of one sort or another. It can also be used to describe something sour, as well as a "prostitute" or "immoral woman." I'm unsure whether I found it reassuring, or not, with regard to the latter meaning, to learn that tart is "sometimes said to be a shortening of sweetheart." Speaking of shortening, sweetie-pie, don't depart for the day without cutting yourself a nice big slice of typo tart. There were 76 pieces of Deptart* in OhioLINK, and "too many records found for your search" in WorldCat.
(A blueberry tart, 31 May 2009, from Wikimedia Commons.)