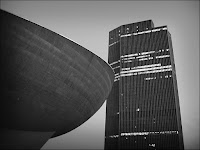 On June 21, 1965, Nelson Rockefeller officially broke ground for the Empire State Plaza in upstate New York. Though not everyone thinks that's something to cheer about. How do you recognize an important event that you're not really willing to "celebrate"? Do you mark it, note it, observe it, remember it? Today we are here to commemorate it, with your classic "too many M's" type typo. It's been fifty years since the machinery of demolition and displacement was unleashed in downtown Albany, in a long-ago place that truly is celebrated (along with the largely Italian families and businesses thriving there) in the locally made 2014 documentary The Neighborhood That Disappeared. I chose this photograph of some of what replaced that neighborhood as it highlights the creepy/campy, cheesy/spacey quality of the ESP, which state workers, residents, and visitors alike nonetheless feel a certain grudging fondness for. It's kind of like "Rocky" meets Ed Wood. As the band They Might Be Giants once put it, after a gig at the Plaza's performing arts center:
The Egg, exciting and old,
The Egg, you'll do what you're told,
The Egg, the Egg, no corners for you...
From the outside I am thinking,
I'm a number, not a man,
From the outside I am thinking...
What were they thinking?

Good question. And here's another one: How many examples of Commemm* (for commemorate, etc.) can you locate in your own library's catalog today? There were 15 found in OhioLINK, and 711 in WorldCat.