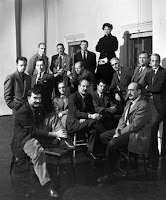 American painter Hedda Sterne is shown here perched atop a pile of Abstract Expressionists dubbed "The Irascibles" by Life magazine. The artists had mounted a protest against the Metropolitan Museum of Art for its purportedly insular, stuffy, and reactionary exhibition American Painting Today—1950, and were refusing to engage with it (expecting bias and "hostility" on the part of the appointed jurors toward what the group was calling "advanced" art). Hedda Sterne archly referred to her precarious placement in this patriarchal portrait as "the feather on top." As she told Sarah Boxer of the New York Review of Books a few years before her death in 2010 at the age of one hundred: "I am known more for that darn photo than for eighty years of work. If I had an ego, it would bother me." Besides, she says, "It is a lie. I was not an Abstract Expressionist. Nor was I an Irascible." Actually, she does sound a teensy bit irascible, but tenacious feminist is probably a little more like it. Hedwig Lindenberg was born on August 4, 1910, in Bucharest, Romania, but fled to New York City in 1941 as the Nazis pressed in on her homeland. By 1950, she was a painter of some renown and one of the signatories on that angry letter to the Met. Life had decided to document the boycott and agreed to let the subjects arrange themselves to look "like bankers" for the shot. Hedda arrived late to the studio and was only grudgingly allowed to take part in any case. "They all were very furious that I was in it because they all were sufficiently macho to think that the presence of a woman took away from the seriousness of it all," she later said. (That "seriousness" does sound more like smug self-absorption and flat-out sexism when put like that.) She adds: "I always thought that art is not, quote, self-expression, but communication." Hedda Sterne might not have liked the label she had been saddled with, but I like the way that she expresses herself: "It's malentendu to consider me Abstract Expressionist. I was invited to participate in many things, but I never considered myself part of that group, or any group, and it shows in my work." Five typos showed in our work in OhioLINK today, and 103 in WorldCat.
(A photograph of 15 of the so-called Irascibles, taken by Nina Leen on November 24, 1950, and published in Life magazine on January 15, 1951. Front row: Theodore Stamos, Jimmy Ernst, Barnett Newman, James Brooks, and Mark Rothko; middle row: Richard Pousette-Dart, William Baziotes, Jackson Pollock, Clyfford Still, Robert Motherwell, and Bradley Walker Tomlin; back row: Willem de Kooning, Adolph Gottlieb, Ad Reinhardt, and Hedda Sterne. Courtesy of Wikipedia.)