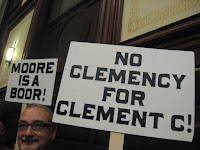 'Tis the season to be indulgent, and 'twould certainly seem that there are many ways of doing that. Adults can indulge in too much booze and fattening foods, and kids in too many presents. It's often said, though frequently ignored, that if you over-indulge your brood, you may end up with a bunch of spoiled brats on your hands. But even God might have once turned a blind eye, at least when it came to His Catholic flock, who were officially offered "indulgences" for their sins. I saw a television ad the other night for lip balm (a "velvety blend of shea, mango, and tucuma butters"), the wearing of which was reported to be a "truly indulgent experience." Indulgent? I thought. Or self-indulgent? Or do those two words overlap sufficiently such that the first can often be used in place of the second? (As with disciplined and self-disciplined, perhaps. But not educated and self-educated. Or righteous and self-righteous. Etc.) It just seems odd, I guess, since logic would suggest that the more one person indulges another, the more that first person would have to deny (or fail to indulge) himself. (There are words that contain their own opposites, though. They're called contronyms.) In any case, I figured it might be okay to occasionally use the word indulgent to mean self-indulgent and this proved to be true, at least according to a couple of online dictionaries that included definitions such as "done or enjoyed as a special pleasure" and "showing, characterized by, or given to self-indulgence." But others omitted that secondary meaning entirely. In 1823, the poem "A Visit from St. Nicholas" was printed anonymously in a Troy, New York, newspaper. Twenty years later, Clement C. Moore claimed it as his own and the nation has indulged him in that self-indulgent notion ever since. However, according to Don Foster, in the 2000 book Author Unknown: On the Trail of Anonymous, it was very likely written by a different man entirely: Major Henry Livingston, Jr. "Another possibility," says Foster, "is that Mr. Moore wrote 'Old Santeclaus.' In fact, if 'Old Santeclaus' was not written by the original Grinch, Professor Clement Clarke Moore himself, then call me 'Rudolph' and never let me play in reindeer games. That 1821 Santeclaus poem has the Professor's stylistic fingerprints all over it. Giving credit where credit is due, I think Moore may be credited with having written one of America's first Santa Claus poems—not 'A Visit from St. Nicholas,' but 'Old Santeclaus.'" The former poem has "visions of sugarplums" dancing in childish heads, and it describes St. Nick thusly: "A bundle of toys was flung on his back, and he look'd like a peddler just opening his pack." In the latter poem, however, Moore ominously warns: "But where I found the children naughty / In manners rude, in temper haughty / Thankless to parents, liars, swearers / Boxers, or cheats, or base tale-bearers / I left a long, black, birchen rod / Such as the dread command of God / Directs a Parent's hand to use / When virtue's path his sons refuse." So which poet and parent do you think was the most indulgent? (Note: I wasn't able to find many typos for that word and its various forms, so please indulge me in the substitution of a synonym, Toleren*, for which there were 13 found in OhioLINK, and 577 in WorldCat.)

(Photo taken of "heckler" at "The Trial Before Christmas," Rensselaer County Courthouse, December 18, 2013.)