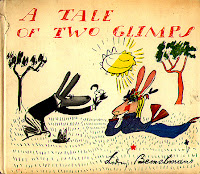 Of all the children's authors one could imagine writing about television, one of the least likely to many minds would have to be Ludwig Bemelmans, the father of "Madeline." However, the great man did in fact write such a book, one that is now, sadly, out of print and very hard to find. It's called A Tale of Two Glimps and it's just as odd as it sounds. Bemelmans had been commissioned by CBS in 1947 to create a whimsical, anthropomorphic kids' book to plug the company's product. He came up with a story about a couple rabbit-like creatures (reminding one a bit of Matt Groening's "Life in Hell" denizens, along with the ubiquitous "rabbit ears" then sprouting from every set) who debate and represent the tried and true of black & white versus the rara avis of the variegated. As one reviewer put it: "An evanescent little soap bubble, this bit of Bemelmania was part of a campaign to promote color TV." Having blogged about television typos on several occasions before, our pick for today is perforce one of "lowest probability," according to the Ballard list. We viewed one of these in OhioLINK, and 19 in WorldCat.

(Cover of A Tale of Two Glimps, taken from the web.)