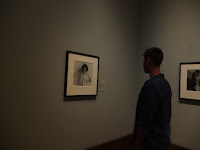 We made it up to Los Angeles on our last day of vacation and were able to squeeze in a trip to the renowned J. Paul Getty Museum. The Getty is truly immense and contains all manner of amazing art. In addition to lingering over "Woven Gold: Tapestries of Louis XIV," and rooms full of Impressionist art, among many other treaures (I spotted "Clara the Rhinoceros" briefly in an orientation video, but was unable to locate her later on), we were excited to find ourselves there for "The Perfect Medium," a celebration of the work of photographer Robert Mapplethorpe. Along with all the portraits of people and flowers, there was also a discreet corner devoted to the "X Portfolio," a series of graphic S & M images of gay men in NYC circa 1970. Mapplethorpe had come under attack for such images during the senatorial reign of Jesse Helms and the controversy surrounding government funding of the NEA. Or what we "intellectual freedom" types were simply inclined to call Art Censorship. (One of my favorite Loudon Wainwright songs states, "If Jesse don't like it, it's probably not art, Jesse knows what's good, oh, Jesse is smart.") The Getty's smart and expansive array of Mapplethorpe's work was accompanied by an equally fascinating exhibit from the collection of his life partner, and patron of his art, Sam Wagstaff. "The Perfect Medium" was the perfect end to a perfect week out west. Meduim* is a typo of "low probability" on the Ballard list, found four times in OhioLINK, and 107 times in WorldCat.