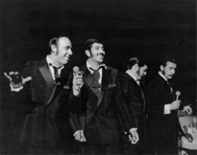 "It's Istanbul, not Constantinople..." sang the Four Lads, a Canadian pop band that had an instant hit with this song in 1953. We might also chime in here that it's Istanbul, not Instanbul, as recorded on 12 records in OhioLINK (two with the qualifier "sic"). There were also 12 instances of Istambul and two of Istabul. "Istanbul (Not Constantinople)" was covered more recently by the alt-rock group They Might Be Giants. The Four Lads knew a thing or two about name changes, having originally been known as The Otnorots ("Toronto" spelled backwards). The song goes on to say: "Even old New York was once New Amsterdam. Why they changed it I can't say. People just liked it better that way..." The New York State Library catalog contained a single typo for Istambul. (Photo of the Four Lads from Jerry Mason's An American Pioneer Gypsy website.)