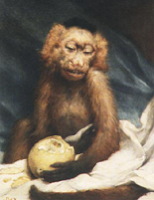 Somebody's been monkeying around here, making today's typo a real lemon. There are 13 hits in OhioLINK for Sourse*, including one "sic" and a few with an apparently variant spelling from earlier times. It's souring my mood just contemplating the idea that there might be catalogers who can't spell the word source, but rather than assume they got soused on whiskey sours at lunch, I'll just point out that, despite our opposable thumbs, it's easier to slide from the R to the S key than it is to reach down for the C. Anyway, that's the best I can come up with right now, but as the saying goes, if life hands you a lemon, make lemonade. And don't forget to check your source. (Painting by Gabriel Cornelius Ritter von Max, from Wikimedia Commons.)