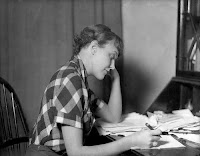 Noel Streatfeild (British author, actress, and daughter of the Bishop of Lewes) would likely have seen her surname misspelled Streatfield rather frequently over the course of her lifetime. But once you've seen it spelled right, it's quite easy to keep straight and just as memorable as her books—books which nearly always have the word "shoes" in their titles. (Circus Shoes, Theatre Shoes, Movie Shows ... extra points if you can name all nine!) Of the first, Ballet Shoes, published in 1936, Streatfeild wrote: "The story poured off my pen, more or less telling itself ... I distrusted what came easily and so despised the book." Readers, on the other hand, adored it. We found four cases of Noel Streatfield in our database today, which is four too many for this wonderful writer who has been bringing joy ("Mary Noel" was born on Christmas Eve, 1895) to bookish, artsy, shoe-loving girls for over half a century now. Streatfeild was appointed an Officer of the Order of the British Empire in 1983, and slipped her slippers three years later at the age of 91—leaving her followers barefoot and bereft. (I also discovered four other personal-name typos by searching on Streatfeild* + Streatfield* in OhioLINK.)

(Image of Noel Streatfeild found on the Web.)