Menonite or Mennonnite (for Mennonite) 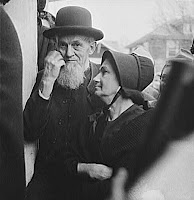 I just read a great book called Mennonite in a Little Black Dress. It's about a woman who grew up Mennonite, left and got married, then went back to stay with her parents when her husband left her for a man he met on Gay.com. It was incredibly funny, and I highly recommend it.

There is a lot of confusion about Mennonites, including how to spell their name. They are named after Menno Simons and are an anabaptist movement which started in central Europe in the 16th century. Although they are often confused with the Amish and seen as very traditional, the Amish actually broke off from the Mennonites because they thought the latter were too liberal.

Menonite is a low-probability typo, and Mennonnite is even more rare. The first appears only twice in OhioLINK, and 28 times in WorldCat. You can remember that there should be two n's at the beginning because that is how Menno spelled his name.

Image of a traditional Mennonite couple from Wikimedia Commons.
Posted by librarytypos at 6:45 AM