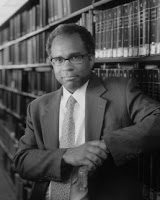 It's significant whenever someone dares to read, much less write, much less utter, much much less entitle a book with, the word nigger—but that's exactly what a number of authors, both contemporary and historical, have done. (Witness Carl Van Vechten, Joseph Conrad, and Agatha Christie for some notable examples.) But such books as those, while they employ the word, are not strictly about the word. In more recent years, however, a handful of scholars and others have turned their attentions to the etymology, meaning, and significance of the so-called "N word." Harvard professor Randall Kennedy asserts in Nigger: The Strange Career of a Troublesome Word that the time has come for this word to be thoroughly re-examined, defused, and demystified. Others fiercely argue for retaining, or even tightening, the taboo against it. In any case, given increasing "literary warrant" for the topic, it seems a reasonable case could be made for authorizing the subject heading: "Nigger (The English Word)." There were 14 cases of Signig* in the OhioLINK database today, virtually all of which were typos for significant or significance.