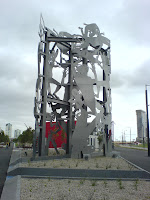 Continuum is one of a relatively small group of words that contain two U's in a row. Many of these have Latin roots; some are Hawaiian. There is, of course, the familiar vacuum, along with the more obscure, and fun to use, ahuula (feather cloak or cape made of minute red or yellow bird feathers, trimmed with black or green feathers, worn in Hawaiia by high chiefs and kings); squush (which the Scrabble dictionary claims is a synonym for squash, and the derivative squushy); and suum (a term imitative of the sound of the wind, used by Shakespeare). Extra credit goes to muumuu (a loose-fitting dress of Hawaiian origin, much favored by Mama Cass) and zuuzuu (candy or confectioneries sold to prisoners from vending machines) for having TWO sets of double U's in each word. There were 14 cases of Continum* in OhioLINK and 470 in WorldCat. Hey, youse guys, do you think you could check your own catalogs for the Case of the Missing U today? (Notice that I'm being a suaviloquus—a term meaning "he who speaks rhetorically"—when I ask that.)

("Continuum" sculpture, 2005, by Michael Snape at Docklands, Victoria-Melbourne, Australia, March 31, 2006, from Wikimedia Commons.)
Carol Reid
Posted by librarytypos at 5:00 AM