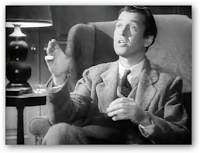 Have you a little Harvey in your house? Or one of pretty much any size and shape, for that matter? Jimmy Stewart, in the role of Elwood P. Dowd, considered a six-foot three and a half inch invisible rabbit named Harvey (a shape-shifting nature spirit, or púca to be exact) his very best friend, in or out of the local looney bin, in the eponymous 1950 film, based on the Pulitzer Prize winning play by Mary Chase. (Ms. Chase was a fascinating figure too, it turns out, a journalist, playwright, and screenwriter, who in 1954 wrote a play called Lolita—one whose title she "hastily switched" when she learned that "a certain sensational novel" bearing the same name had just been published—and wrote two children's books to boot, Loretta Mason Potts in 1958 and The Wicked, Wicked Ladies in the Haunted House in 1968.) But back to Harvey and his faithful friend, Elwood P. Dowd. Elwood's family and friends are worried in equal measure about his sanity and his drinking habits, but the unflappable object of their concern seems to have gotten his priorities straight. He tells the doctor: "Years ago my mother used to say to me, she'd say, 'In this world, Elwood, you must be'—she always called me Elwood—'In this world, Elwood, you must be oh so smart or oh so pleasant.' Well, for years I was smart. I recommend pleasant. You may quote me." (Thanks, I just did!) There were five cases of Havey + Harvey in OhioLINK (make that 36 for Havey alone, or 44 if truncated as Havey*, but do be aware that Havey is not an altogether uncommon surname) and 43 in WorldCat. Have a smart and pleasant time with this one.

(Cropped screenshot of James Stewart from the trailer for the film, 1950, from Wikimedia Commons.)