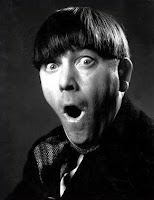 Women and girls famously "don't get the Stooges" (coincidentally, Columbia Pictures released its first Three Stooges movie, Woman Haters, in 1931) and I have to admit, I'm not exactly an exception to that rule, although I can kind of relate to Moe's bangs. Wikipedia reports that his "distinctive hairstyle came about when he was a boy and cut off his curls with a pair of scissors, producing a ragged shape approximating a helmet or bowl." I did something sort of similar on the eve of my kindergarten class photo in a strikingly unsuccessful attempt to draw a straight line above my eyebrows. (While I did not, like Moe, hide under the house for several hours, creating a "panic," my mother was just as understanding about it as Mrs. Horwitz, who was so glad to finally lay eyes on her missing child that she didn't even bring up the hair thing.) Moses Harry Horwitz was born in 1897 in the Bensonhurst neighborhood of Brooklyn, NY, the fourth of five boys and the middle one of the three original "Stooges." The passage of time has given me a little more insight into and appreciation of the Stooges, who were really quite innovative in their own way. For example, they made three different anti-Nazi spoofs during the 1940s: You Nazty Spy! (Moe's favorite Three Stooges film), I'll Never Heil Again, and They Stooge to Conga. According to Wikipedia: "Moe's impersonation of Adolf Hitler highlighted these shorts, the first of which preceded Charlie Chaplin's controversial film satire The Great Dictator by months." There were no examples of today's typo in OhioLINK, although I did find 30 or so in WorldCat (around eight of which proved to be correct spellings of the surname Moeny).

(Promotional photo of actor Moe Howard of The Three Stooges, 1933, from Wikipedia.)