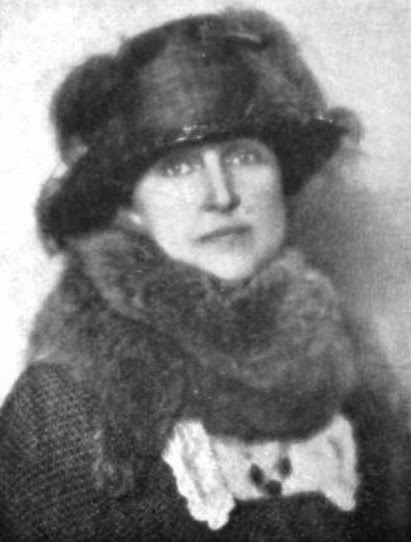 A colleague recently showed me a catalog record containing our rather delightful typo of the day, along with its bracketed correction. The misprint was on the work itself, a 1994 New York State Assembly document. The title field read: Public hearing on communication barriers in health care for persons who are deaf, deaf-blind or heard [i.e. hard] of hearing. It more or less spoke for itself, but my coworker added the following for amplitude: "A little tone-deaf considering the topic, no?" Yep, I hear ya, and so, I'm sure, would have Alice N. Trask, a woman who might've been hard of hearing, but once you have heard of her, is pretty hard to forget. (The hat and stole alone speak volumes. Or at least one lovely, slim volume or two.) In 1915, Trask was appointed the head of the New York School for the Hard of Hearing; she later founded and presided over the San Francisco League for the Hard of Hearing, as well as the San Francisco School of Lip-Reading. An "Appreciation" published in the Volta Review in 1920 describes her influence thusly: "She realizes that the ideal teacher of lip-reading must more nearly approach a metaphysician than any other class of instructor, dealing, as she does, with so much that is intangible; that it requires so much intuition, such fine sensibilities and nice adjustment to get en rapport with natures so oversensitive and unapproachable; and also that it is very necessary that the teacher be blessed with enough of their infirmity (deafness) to inspire them with courage and hope. There is nothing so cheering to the deafened as to find some one who is deafer. Mrs. Trask is very cheering in this regard." You may or may not be cheered to hear that we uncovered seven cases of today's typo in OhioLINK, and 122 in WorldCat.
(Alice N. Trask, from The Volta Review, V. 23 No. 11, Nov 1921, p. 478, courtesy of Wikimedia Commons.)