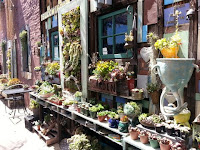 In college I was a philosophical freshman, so right off the bat, I decided to take a class in Logic. (No, according to some people, it didn't really help that much.) One of the first things they teach you is that, in certain cases, all A's are B's, but not all B's are A's. They usually supply a trite example or two involving people and men, or pets and cats, etc. But I think if it were me, I might go with a rather lovelier and less obvious syllogism, such as: "All sedums are succulents, but not all succulents are sedums." Succulents, almost like Californians themselves in a way, seem to extract whatever moisture they require from the air itself. We dropped by the Succulent Cafe in Oceanside, California, the other day while on vacation. It was one of the most charming outdoor eateries I've ever seen, and it was here we learned just how strikingly beautiful and prolific these sometimes prickly and aridity-adoring plants can be. I've got various sedums growing in my rock garden back at home, but out here you see many other types of succulents as well. There are numerous overlapping categories. A recent crossword puzzle prompted: "Some succulents." (The answer was ALOEVERAS.) Or as Wikipedia puts it: "Not to be confused with cactus; nearly all cacti are succulents but not all succulents are cacti." Virtually no Catcus is a cactus, however: today's typo turned up only once in OhioLINK, and eighteen times in WorldCat.

(Photograph of the Succulent Cafe in Oceanside, California.)