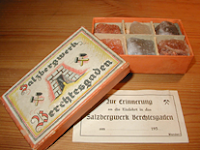 In some cases, "Pass the salt" could mean transporting it over the ocean, or extracting it from the brine itself. Some people are partial to sea salt; others are more salt of the earth. Language can be salty and so can dogs. Salt was once considered more valuable than gold. We panned for the typo Transalt* in OhioLINK and dug up 29 examples, including a sprinkling of "sics."