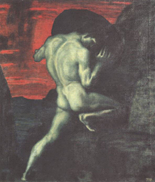 "Workers rock" might be a hipper way of putting it, but I always liked the old "Workers of the world unite!" Either way, we're all pretty much united when it comes to getting a three-day weekend. The typo Wrok* shows up 13 times in OhioLINK, making it one of "moderate probability." You might also be able to pull up a few more with Netwrok* (there are eight in our database to date). But don't get stuck between a "wrok" and a hard place. After all, it's your day off.

(Picture of Sisyphus hard at work, by Franz von Stuck, 1920, from Wikimedia Commons.)