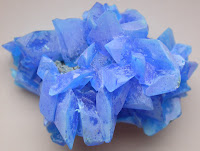 Ooooh. (That's what she cooed.) This startling specimen of copper vitriol is described as "dehydrated" on the Wikimedia Commons page where I discovered it, but I simply can't imagine a less apt-seeming word for something of such coolly intense and gorgeously slaking blue. I found 16 cases of Cooop* in OhioLINK this morning, nearly all of them typos for cooperation and the like (with one lone Cooper among them and not a copper in sight.). Gazing at this meditative hue for a moment or two should remove any lingering traces of vitriol, after which let's all try and cooperate and remove all traces of today's typo from our catalogs. (Note: when it occurred to me to omit the P, I found a full dozen more of these, bringing the total to 28, mostly for words like coordinate.)

(Photo of "chalcanthite, or copper vitriol, white tarnished because of dehydration," by Ra'ike, 2007, from Wikimedia Commons... Plus check out what this other guy made in his apartment.)