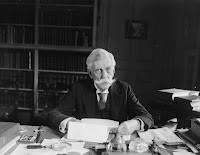 According to WikiAnswers, that great fount of web wisdom, Oliver Wendell Holmes Jr. served on the Supreme Court from 1902 to 1932, retiring at the age of 90, just two months shy of his 91st birthday. That makes him the oldest Supreme Court justice ever, unless John Paul Stevens, now 89, stays on the job past February 2011. Oliver Wendell Holmes Sr. had been influential in getting doctors to wash their hands in a busy hospital and his son was equally effective at preventing people from crying fire (when there wasn't one) in a crowded theater. Enjoying his many years on the bench, O.W.H. Jr. wouldn't cry uncle and be a willing retiree. (Currently, term limits for Supreme Court justices are considered unconstitutional.) We found ten cases of missing E's in the typo Retirment (for retirement) in the OhioLINK database. Make a decision in favor of fixing any of these you may find in your own catalog today.