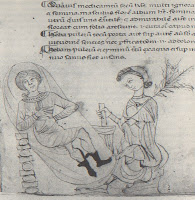 Pro-choice partisans often like to portray pro-lifers as being anti-sex, but, strictly speaking, the latter are no more apt to be prudes than the rest of us. They do, however, protest the use of abortion as a method of birth control or one for dispatching a wrong-sexed fetus. (Actually, no fetus is wrong, according to some of these folks: a disabled one, the product of rape or incest, one that endangers the life of the mother. They're all good.) AUL (Americans United for Life) is a Chicago-based pro-life organization founded in 1971. (Roe v. Wade was made law in 1973.) They say there's no such thing as being "a little bit pregnant," but I suspect that those seeking and providing abortions may disagree. You're only a little bit pregnant if you can get to a sympathetic doctor soon enough. We found two cases of Sexul* and one each of Sexal* and Sexaul* in OhioLINK today, which makes it a "low probability" typo on the Ballard list. Try and take care of this one promptly, though, before you end up with a full-blown problem on your hands.

(Drawing from a 13th-century manuscript of Pseudo-Apuleius's Herbarium, depicting a pregnant woman in repose, while another holds some pennyroyal in one hand and prepares a concotion using a mortar and pestle with the other, scanned from Contraception and Abortion from the Ancient World to the Renaissance by John M. Riddle, from Wikimedia Commons.)