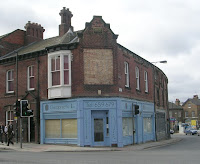 Doctors often put them down (the AMA called them members of an "unscientific cult" and boycotted them until losing an antitrust suit in 1987)—but when your back is killing you or you've got a serious pain in the neck, a good chiropractor might be exactly what you need. Daniel David (D. D.) Palmer was the developer of chiropractic and founded the Palmer College of Chiropractic in Davenport, Iowa, in 1896. His son, Bartlett Joshua (B. J.) Palmer, took over running the college in 1904 and was a tireless advocate for its acceptance by both the public and the medical profession. He was helped immeasurably in this work by his wife, Mabel Heath Palmer (known as "The First Lady of Chiropractic"), and their son David. This original form of the practice persists today as "straight chiropractic," considered somewhat woo-woo and controversial by the "mixer" crowd. There were seven cases of Chiroprat* in OhioLINK today, along with two of Chiropa* and one of Chrioprac*. Here's hoping that you'll never need it, but for those of us who do, let's make the proper adjustments to our records and make sure that words like chiropractic and chiropractor are spelled correctly in our catalogs.