Ally + Alley (for Alley or Ally) 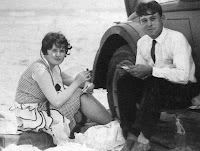 I just spied on the desk next to mine a 1978 publication entitled From the Back Wards to the Back Alleys by Paul Harenberg, about the deinstitutionalization of mental patients. (Yikes, that 22-letter word there is enough to make anybody a little crazy! As a matter of fact, a video record for this title in OhioLINK misspells it "deinstitionalization.") But if you tend to spell the word for the little side street (alley) like a supportive friend or colleague (ally), and/or vice versa, you've basically got it backwards. In other words ... oops! Cartoonist V. T. Hamlin (who dropped out of college when his art teacher announced to the class: "Now here's a man with a wonderful talent and he wants to waste it on being a cartoonist!") was the creator of the popular comic strip "Alley Oop," which debuted in 1932 and ran for the next forty years. At its pinnacle, it appeared in 800 newspapers, and is continued by Jack and Carole Bender in more than 600 today. There were six cases of this combination typo in OhioLINK, two of which were false hits (i.e., correct spellings of two different words), and 55 in WorldCat. Ally yourself with your fellow catalogers to look into this situation. I'm sure it won't be a blind alley.

(V.T. Hamlin and his wife, Dorothy, having lunch on a Texas beach in 1928. Note, says Wikipedia, the resemblance of Dorothy to Alley Oop's Ooola.)