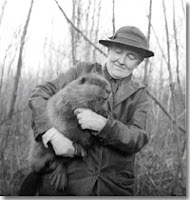 Dammit. Something is just not right around here. An essential part of my hometown is missing. Albany, N.Y., it seems, was once awash in beavers, as was a good portion of the rest of the United States. However, according to an article in the current Atlantic, the British Hudson's Bay Company in the 1820s decided to declare war on them, while employing the dubious argument that there would be little incentive for Americans to continue exploring the West without the siren song of beaver pelts to lure them. Within twenty years, the animals were all but eliminated from the Pacific Northwest, pretty much run out of town on a rail, as it were. Nevertheless, for a quite while, beavers defined the capital of New York State. The city's second-largest park, now known as Lincoln Park, was originally called Beaver Park. Alice Morgan Wright, who is pictured to the left, was an Albany sculptor, suffragist, and animal rights activist. I'd love to see a sculpture of her holding that beaver in Lincoln Park someday, along with a copy of the Louis Slobodkin statue of Abraham Lincoln, "The Rail Joiner." (Slobodkin, of course, was another prominent Albany artist). Yet another Albany sculptor, Gertrude Lathrop (sister of Dorothy Lathrop, who received the very first Caldecott Medal in 1938), honored both the beaver and Albany's Dongan Charter (the oldest surviving city charter in the country) on a commemorative coin in 1936. In fact, Albany itself, while under Dutch rule in the 1600s, was for a time called Beverwyck (or Beverwijck), loosely translated as "beaver district." We found five examples of today's typo in OhioLINK, and 37 in WorldCat. Get busy today and do the Wright thing, restoring this typo to its proper spelling in your own library's catalog.