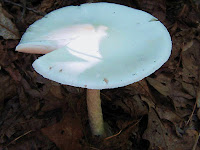 I've been told that my writing is sometimes confusing. ("I liked what you wrote," a coworker said to me once. "I didn't understand it, but I liked it.") I've also been given to understand that I engage in too many "fits and starts," and have a tendency to "bury the lede" (or should that be lead?) and go off on tangents. I've been criticized as well for stuffing my sentences (with parenthentical comments) and startling the reader with italics. A professor once described my style as "elliptical." One way I try and deal with this, I've noticed, is the frequent use of the phrase "speaking of which," which I deploy as a means of softening the blow that I'm about to deliver by suddenly careening off course. I get this in part, I think, from my onetime idol J. D. Salinger, whose works I devoured as a teenager. I adored the way he wrote and remember in particular a passage from The Catcher in the Rye about a kid at Holden's school who was harassed by both teacher and students for the egregious sin of "digression." Salinger clearly sympathized with his dilemma and brazenly scorned the scolds. Much to the benefit and delight, I might add, of his many devoted fans. But I digress. Speaking of which, today's typo is Eliptical* (for elliptical*), which appears ten times in OhioLINK and 125 times in WorldCat. As an aside, one of the records I came across was for a John Cage recording of Atlas Eclipticalis, a typo twofer since the second word in the title was apparently mistranscribed by the cataloger as both Elipticalis and Elipticals.