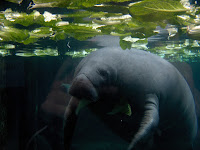 The Bob Dylan line "My sense of humanity has gone down the drain" (from the song "Not Dark Yet") once gave rise to a hilarious mondegreen: "My sensitive manatee has gone down the drain." According to a friend and Dylan fan, "that would have to be one really small manatee or one really big drain." (Dylan famously doesn't publish his lyrics upon an album's release and my friend intimates that he isn't necessarily above having engineered such a deliberately manateed mishearing; however, another fan, William Routhier, clearly claims it as his own.) A manatee is also what some sensitive sailors and overly gullible TV watchers might take for a mermaid, though the Animal Planet's fishy mockumentary "Mermaids: The Body Found" would beg to differ. One probably true thing about this otherwise work of fiction is the deleterious effect of Navy sonar testing on our ocean's wildlife. Let's all get in touch with our humanity and help keep animals like whales, seals, and manatees from going down the drain. There were five instances of Humami* in OhioLINK today, and 71 in WorldCat.