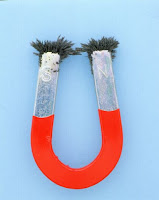 Are you attracted to magnets? I can't remember the last time I actually used one, other than as decoration for the refrigerator or maybe that children's toy where you move a magnetized pencil around the drawing of a masculine visage to produce various images of facial hair (beards, mustaches, bushy eyebrows, spiky hair, etc.). And people who live in so-called Lustron houses rely heavily on magnets to mount things on their walls, since hammers and nails are verboten in such steel-enameled domiciles. The classic magnet is shaped like a horseshoe, often with a red or magenta paint job as seen above. In some ways, magnets seem almost like magic, but ironically enough, that's the beauty of science. The combination Magnet* + Magent* turns up 16 times in OhioLINK and 368 times in WorldCat; Magentic* alone gets 14 hits in the former and 304 in the latter.