Planing + Planning (for Planning or Planing) 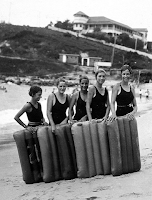 Are you planning to do some planing around your house this year? I've got a few corners that don't look quite right and a door or two that doesn't exactly close tight either. But a perfectly "sqaure" abode is a hard thing to achieve, especially when you live atop what used to be sort of a sand dune. Around 25 miles north of Albany's sandy "Pine Bush" is a charming little place called Round Lake, which one resident has described as "like something out of Mayberry." Another one claims there isn't a right angle to be found in this entire collection of somewhat ramshackle "gingerbread" fixer-uppers, but you really couldn't find a cuter town to settle down in if you planned it. Or planed it. Round Lake, a former Methodist camp, is also situated on a lake, as you may have inferred, which brings us to another meaning of planing: "to rise partly out of the water, as a hydroplane does at high speeds." This is apparently what the Australian girls pictured above are getting ready to do. It looks something like surfboarding, but with rubber rafts. I was never much good at these kinds of water sports, but back on the beach, or out on somebody's lawn, we kids used to practice a presumably amazing form of "levitation." One of us would lie flat on the ground and the others would slip a finger or two each beneath the body, chanting "Light as a feather, stiff as a board!" while lifting them up in the air. There were 68 cases of today's combination typo in OhioLINK, and 1242 in WorldCat, so lighten up, stiffen your resolve, and plan to smooth out as many of these as you can in your own catalogs today.

(Surfo planing girls, Coolangatta, circa 1934, from the Queensland State Archives and Wikimedia Commons.)