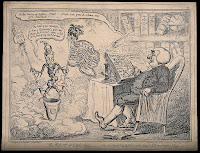 The other day, while discussing Donald Trump's obvious appeal to NRA members and firearms aficionados in Nevada, a friend of mine wryly and rhetorically asked: "How can the peasants revolt without arms?" My reply: "I dunno. Gandhian passive resistance?" Another friend then kiddingly referred to me as a "staunch gun nut," which absurd charge I of course promptly denied, wondering aloud, though, why gun nuts are always called "staunch." (Like how feminists are often called "shrill." Although "staunch" is considered better than "shrill," I think.) For the rest of that day I kept hearing the word staunch being used: "staunch Democrats"; "staunch Republicans"; "staunch opponents of Donald Trump." So is "staunch" some sort of cultural meme at the moment? Or is it just a really common word? I see I even used it here myself last time: "staunch anti-Semites." Staunch ... (it's starting to sound kind of strange) means "firm" and "unwavering," which is not necessarily a bad thing. Although in some ways I think I'd rather be soft and wavering, like a passive peasant fan of the Mahatma. I notice that I also included the word polarizing in my Dreyfus Affair post on Tuesday. According to Wesley Morris ("It's in America's DNA to Be Divisive," New York Times Magazine, February 14), the word divisive once meant causing disagreement or able to be debated; now it implies that debate itself would be best avoided. "Trigger words" (interesting phrase!) refers to those that would seem to behave more like sticks and stones, or perhaps even guns and ammo. We are all too easily offended, apparently, but determined to stand our own ground. We got 90 hits on today's typo in OhioLINK, and "too many records found for your search" in WorldCat.

("A staunch magistrate surprised by the apparition of a radical demon." Etching by G. Cruikshank, 1835, from Wikimedia Commons.)