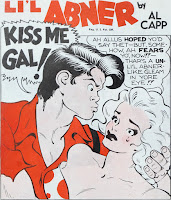 Uh oh, I seem to have lost my gloves! But maybe I can figure something out. Today is Leap Day and according to an old folk tradition, if a woman asks a man to wed on this quadrennial cold winter's day, and he refuses her proposal of marriage, he must then buy her twelve pairs of gloves with which she can hide her left-hand ring finger and spinster-like chagrin. A friend of mine wonders whether this sort of thing might possibly go both ways, bemoaning the fact that he has been walking around with a sad single glove stuffed in his pocket after its partner went missing a couple of weeks ago. But alas, it does not. This so-called "pseudo-holiday" has spawned numerous variants over the years, perhaps the most famous of which was "Sadie Hawkins Day," popularized by Al Capp in his comic strip L'il Abner, which ran in the newspapers from 1934 to 1977. This was the day the local gals of Dogpatch, USA, got to ask an unhitched fella to the dance—and maybe more. Sadie Hawkins Day celebrations quickly spread throughout the land. Over in Ireland, it was believed this tradition may have originated way back in the 5th century when St. Bridget reportedly brokered a deal with St. Patrick that permitted the country's would-be brides to take the reins. This is largely considered apocryphal, though, as such a practice is not really noted again until the 1800s. However, as Eric Felten writes, "A play from the turn of the 17th century, 'The Maydes Metamorphosis,' has it that 'this is leape year/women wear breeches.'" He adds, "A few hundred years later, breeches wouldn't do at all: Women looking to take advantage of their opportunity to pitch woo were expected to wear a scarlet petticoat—fair warning, if you will." Take heed, then, and leap into the breach. We snagged six cases of our typo for the day in OhioLINK, and 176 in WorldCat.