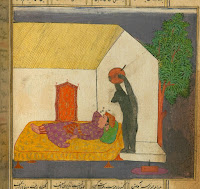 A constant reader spotted a typo in an online news story about the importance of locking your car. The author wrote: "But in the case that you forget to do so, or if locked car doors don't impede a thief from breaking in the vehicle, remember this: hide the car manual." They added: "Some drivers even take the maual out of the car." "Isn't that," quipped our typo correspondent, "what bears do?" Bears can appear to be either friend or foe, and in some cases they're both. The Basnavi, by Persian poet and mystic Rumi, recounts a rather strange tale: "A kind man, seeing a serpent overcoming a bear, went to the bear's assistance, and delivered him from the serpent. The bear was so sensible of the kindness the man had done him that he followed him about wherever he went, and became his faithful slave, guarding him from everything that might annoy him. One day the man was lying asleep, and the bear, according to his custom, was sitting by him and driving off the flies. The flies became so persistent in their annoyances that the bear lost patience, and seizing the largest stone he could find, dashed it at them in order to crush them utterly; but unfortunately the flies escaped, and the stone lighted upon the sleeper's face and crushed it..." Patience is a virtue, so please bear with me. There were 20 cases of Maual* (for manual*) found in OhioLINK today, and 394 in WorldCat. Oh, and check out this early headshot of Paul Reubens (aka Pee-wee Herman) in what's got to be the greatest bear mauling shot ever taken, from last Sunday's New York Times Magazine.

(Illustration from The Basnavi, 1898, courtesy of Wikimedia Commons.)