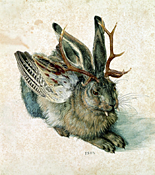 The "jackalope" has long been a popular trope among pranksters, developing a variety of different looks along the way. The technical term for this cryptid is Wolpertinger. They usually have the body of a rabbit or other small mammal and what appear to be antlers (believed to be caused by the Shope papilloma virus). While these medical/mythical mysteries may have a "hare" too many appendages, who would have the "hart" to lop them off? However, that's just what you'll need to do to the third e in today's typo, which seems to be taking its cue from words like envelope and antelope. Where discouraging words are seldom heard in OhioLINK, I did find 37 samples of this one. In addition to Develope, you might also want to search for Developes and Developement* (I got 16 and 111 hits, respectively, including some seemingly misspelled French words and some with "[sic]" after them), but be careful when it comes to truncating this typo. Both developed and developer properly include that extra e. (Early drawing of Wolpertinger from Wikimedia Commons.)

Found this in a google search for "develope" -- I am proofing a book of essays by Herbert Spencer for project gutenberg and he uses "develope" four times in the course of the book -- intermixed with about 6 uses of "develop" and no obvious difference in the intended meaning.