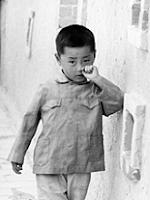 A picture may be worth a thousand words, but the word Picure* in OhioLINK is only worth seven. (An exploratory search of WorldCat, however, picks up 75 records containing the typos Picure, Picures, and Picuring.) There are ice picks, guitar picks, toothpicks, and picks of the week. There are pics we stick on walls and ones we attach to emails. And then there's that particular pick that dares not speak its name—furtive, illicit, and socially unacceptable. (As Seinfeld once put it, after being caught in an apparent pick at a traffic light: "I am not an animal!") Generally speaking, it's not a pretty picture. But when left in the hands of a child, even this one makes for a very cute pic. (Picture by photographer Steven Yang from the Dunhuang China website.)