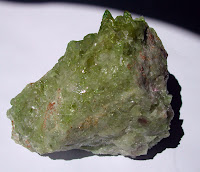 Asbestos has a bit of a bad name these days, but it's long been considered a remarkable substance for the purposes of insulation. Asbestos became popular in the late 19th century, but even the ancient Greeks recognized its virtues as well as its vices. According to Wikipedia: "The Greek geographer Strabo and the Roman naturalist Pliny the Elder noted that the material damaged the lungs of slaves who wove it into cloth ... The word asbestos (σβεστος) is a borrowed Greek adjective meaning inextinguishable. The Greeks termed asbestos the miracle mineral because of its soft and pliant properties, as well as its ability to withstand heat." Perhaps the best asbestos comes from the Jeffrey Mine in the town that bears its name, Asbestos, Quebec. There are three cases of Abesto* in OhioLINK today, so you might take a chance on unearthing a few of these typos—but I'd stay away from the real thing.

(Vesuvianite from the Jeffrey Mine in Asbestos, from Wikimedia Commons.)