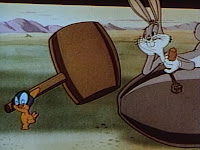 Cartoon animators like Tex Avery and Chuck Jones, along with "novelty song" composers like Roy Atwell, often found ways of poking fun at death by the use of absurdist hyperbole. In 1915's "Some Little Bug Is Going To Find You," Atwell writes:

In these days of indigestion
It's oftentimes a question
Of what to eat and what to leave alone.
For each microbe and bacillus
Has a different way to kill us
And in time they always claim us for their own.

There are germs of every kind
In any food that you can find
In the market or upon a bill of fare.
Drinking water's just as risky
As the so-called deadly whiskey
And it's often a mistake to breathe the air.

Today we find eight bugs in OhioLINK for the word disease*. The diagnosis could be as benign as a slip of the finger, but take care not to trip over the Freudian as you're going out. While curing your catalog of Diesease*, also be on the lookout for resident bookworms and the rest of their bug friends (silverfish, cockroaches, and beetles).