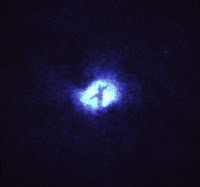 A "black hole in space" has been defined as a "rip" or a "tear" in the "space-time continuum." I haven't the foggiest notion what that means, but I do know that typos can tear the fabric of accessibility in electronic databases. Electorn* appears ten times in OhioLINK and 67 times in WorldCat and might turn up in your OPAC as well. This picture was taken with the Hubble telescope and shows the nucleus of the Whirlpool Galaxy (M51). According to Stephen Conatser, who posted this shot to Wikimedia Commons: "The cross marks the location of the black hole at the center of the galaxy [and] was first interpreted as two dust rings circling the nucleus [but] was later determined to simply be foreground dust lanes silhouetted by the active nucleus." Okay, dust I understand. So let's do a little housecleaning in our own universe of titles and sweep this typo from our catalogs.