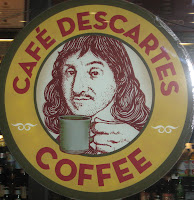 French philosopher and mathematician René Descartes (1596-1650) represents, along with Gottfried Wilhelm Leibniz and Benedictus de Spinoza, the Continental Rationalist school of thought. Simply put, Rationalists believed that reason and intuition were the keys to all knowledge, rather than the sensory experience favored by the Empiricists.

Even those not acquainted with Descartes will recognize his famous dictum “Cogito ergo sum,” or “I think, therefore I am,” which has produced many humorous spin-offs. The Café Descartes coffee shops in Chicago, playing on this theme, have adopted the motto “I drink, therefore I am.”

Continetal is a low-probability typo on the Ballard list. There are currently 6 entries in OhioLINK, and you might reasonably expect one or two to appear in your own catalog.