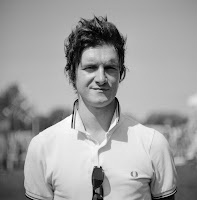 The great thing about a vision is that it can be of practically anything. I happen to like ducks, so this pic called "My Duck Vision" appeals to me as both a straightforward photographic image as well as a total mystery regarding what the "duck" it's supposed to mean. I was reading something recently about the American Black Duck, a somewhat endangered species indigenous to the nearby Adirondack Mountains and closely related to the Mallard. And I suspect if this feathered, ebony-locked athlete, who looks like he's about to take part in some sort of division playoffs, were in fact a duck, that's probably just the sort he would be. The Black Duck is "extremely wary and fast on the wing," rather like I imagine this guy is on the tennis or some other court of public opinion. But despite what anyone says about him, I'll bet it all rolls off his back, or the back of his head anyway, like water off a duck. We scored 19 cases of Devision* in OhioLINK this morning, and 679 in WorldCat.