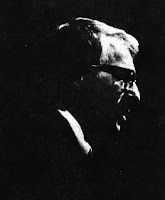 Ray Bradbury passed away on June 5 at the age of 91. The author of 27 novels and over 600 short stories, Bradbuy once claimed that "libraries raised me." Bradbury is most famous for the 1953 dystopian novel Fahrenheit 451, which was made into a wonderful film by François Truffaut in 1966. As a matter of fact, I once thought this was one of the rare cases where the film might have actually been better than the book it was based on, although I later was forced to reconsider that assessment. You see, I had unwittingly read an expurgated copy of Bradbury's classic. In 1992 an eighth-grade class in Irvine, California, was given copies of Fahrenheit 451 with, according to the American Library Association, "scores of words—mostly hells and damns—blacked out." (Blacked out, that is, by previous students, at the teacher's urging!) "The novel," ALA could not resist adding, "is about book-burning and censorship." (Although the author told LA Weekly in 2007 that it's not about censorship so much as how television destroys an interest in reading books, which leads to the perception of knowledge as an assortment of out-of-context factoids.) After hearing about the do-it-yourself bowdlerization in that California classroom, I decided to finally read this book myself, so I picked up a copy in a used bookstore. I then decided to jot down on my bookmark all the instances of hell and damn I could find, but surprisingly by the end I had only noted one or two of them in the entire thing. A little detective work eventually turned up the unsettling news that my version of the book, though one could not judge this by the cover, had been professionally sanitized for our youth. (As opposed, I suppose, to unprofessionally, by them.) Fortunately, unlike the characters in Fahrenheit 451, we don't have to commit this book to memory in order to gain access to it the way Ray Bradbury intended it to be read. Farenheit occurs eight times in OhioLINK (Farhenheit once) and 212/11 times in WorldCat.