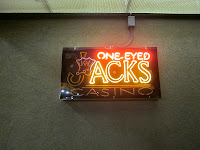 Ack! Ack! We found about a dozen examples of Aknowl* (for acknowl*) in OhioLINK today, and slightly over 400 in WorldCat. While there may be a lot of words in English that end in a-c-k (back, black, clack, crack, frack, and hack are just a few of the single-syllable ones), ack itself isn't exactly a word. Although if you double it up (ack-ack), it's defined in the dictionary as "anti-aircraft fire." (It's a case of onomatopoeia.) Today's picture shows a much better way to get bombed, however, and highlights the difference one little letter can make sometimes, along with the importance of periodically shining a light on such things. You can simply trust your luck on this, or better yet, check your own catalogs in order to acknowledge the presence or absence of today's typo there. And, speaking of acknowledgments, I'd like to take this opportunity to thank everybody who has helped to keep our little blog up and running for the past five years. We have recently switched to a somewhat less frequent publishing schedule (three times a week or so) and will be welcoming a couple of newish volunteers on board as well. So look out for these changes in 2013, and if anyone else out there would like to try their hand at "typo blogging" too, please drop us a line. (You might think you lack the knack, but hold on, Mack, we've got a FAQ!)