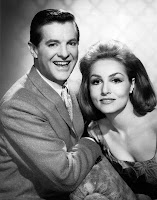 Do you ever find yourself scratching your head or twitching your nose or popping out of a bottle (or whatever it is you do when you're feeling perplexed, confounded, bemused, or nonplussed) and thinking: This does not compute? You might assume the expression comes from Star Trek or Star Wars ("There's absolutely no difference," asserts Penny on a 2012 episode of The Big Bang Theory) or possibly Lost in Space or Doctor Who. Or from the mouth, in any event, of some other boyish robot/alien/android. But surprisingly enough, the phrase was first uttered by the utterly feminine Julie Newmar (in the role of Rhoda Miller, aka AF709) on the short-lived sixties sitcom My Living Doll. At least according to Jesse Sheidlower, editor at the Oxford English Dictionary and author of the eye-catching 1995 lexicon The F-Word, citing the Random House Historical Dictionary of American Slang. Which is good enough for me. There were 23 examples of today's typo found in OhioLINK, and 397 in WorldCat. This one actually does compute (it's common to drop the "ta" in words like computational) and adds up to being a "high probability" typo on the Ballard list.

(Photo of Bob Cummings and Julie Newmar from the TV show My Living Doll, September 4, 1964, from Wikimedia Commons.)